Text and photo by Christa I. De La Cruz

On March 1, 2013, winners of the 28th De La Salle University Annual Awards for Literature and the 3rd De La Salle University Annual Awards for Visual Arts were recognized for their excellence in the arts during the awarding ceremonies at the Multi-Purpose Hall of Br. Andrew Gonzalez Building at DLSU-Manila. Both contests are open to all undergraduate students enrolled during the Second Trimester of SY 2012-2013 in any of the 17 participating schools under De La Salle Philippines. 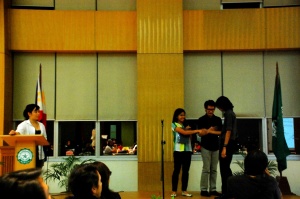 Facilitated by emcees Angelo Tiglao of the Arts College Government (ACG) and Stephanie Te of Green Giant FM, the awarding was introduced through an opening remarks by Demi Ng, Managing Editor of the Malate Literary Folio. Guests were treated to a night of poetry and music as members of Malate read literary pieces from local and foreign writers and Kimberly Tanhui perfomed a song rendition. Genevieve Cruz, Chief of Staff of ACG, delivered the closing remarks and acknowledged the participants who supported the event.

Honorable Mention
“How to Find Sunlight” by Manuel Villa III

Third Place
“Caesura” and “Cipher,” both by Francisco Nuñez

This year’s Board of Judges were Erika Carreon and Johann Espiritu for Short Story; Merlie Alunan and Simeon Dumdum for Poetry; Rebecca Añonuevo and Fidel Rillo for Tula; Kidlat de Guia and Edwin Tuyay for Photography; and Christina Dy and Ana Katrina Ocol for Drawing.

The Unyon ng mga Manunulat sa Pilipinas (UMPIL) is the largest organization of Filipino writers in the country. Founded in 1974, the organization was known for a time as the Writers Union of the Philippines. UMPIL annually holds its National Congress every last Saturday of August. The organization awards the Gawad Pambansang Alagad ni Balagtas, Gawad Paz Marquez Benitez, and Gawad Pedro Bucaneg to outstanding writers, educators, and literary organizations.